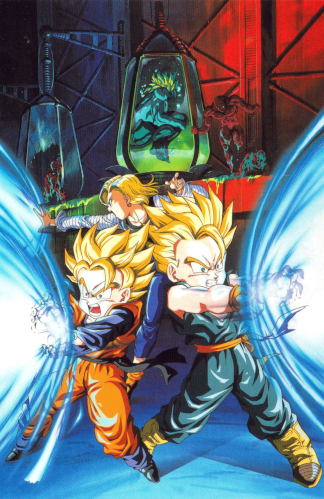 Dragon Ball Z: Bio-Broly (known in Japan as Doragon Bōru Zetto: Sūpā Senshi Gekiha!! Katsu No wa Ore da; lit. "Dragon Ball Z: Super Warrior Defeat!! I'm The One Who'll Win") is the eleventh Dragon Ball Z movie. It was released in Japan on July 9, 1994, between episodes 232 and 233. It is the sequel to Dragon Ball Z: Broly – Second Coming and the final installment of the Broly films. Funimation Entertainment dubbed it into English in 2005.
Advertisement:

Mr. Satan is challenged to a fight by an old rival, and he is taken to an island where the fight is to be held. Accompanying him are Android 18, who is making sure he doesn't skip town before paying the money he owes her for letting him win the World Martial Arts Tournament, and Trunks and Goten, who are stowaways. When they get there they find that the rival doesn't want to fight himself, but rather has created a force of genetically engineered bio-warriors to fight Satan. Unfortunately for everyone involved, one of these bio-warriors was made from the DNA of Broly, and when he is released, all bets are off.