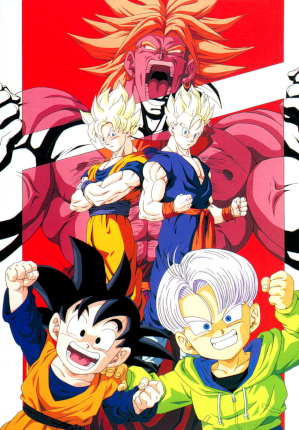 Not pictured: Videl, Krillin, and a dinosaur.
Advertisement:

Seven years have passed since Goku's defeat of Broly, which culminated with Broly being blasted to Earth and frozen over while in a coma. Now, Gohan has grown up, Goten is born, and Goku has died. While Goten, Trunks, and Videl are looking for the Dragon Balls, they come across a village that is being terrorized by a monster. They decide to help, but as they are waiting for the monster to appear, the sound of Goten's crying causes Broly to regain consciousness, seeking revenge! But, how will the Z warriors repel his might without Goku?