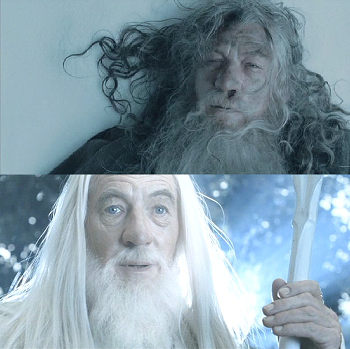 "Darkness took me. But it was not the end.
I've been sent back until my task is done."
Master Kavar: I thought you had died in the Mandalorian Wars...
Kreia: "Die"? No — became stronger, yes.
— Knights of the Old Republic II: The Sith Lords
Advertisement:

The Hero is fighting The Dragon, or the Big Bad, and finds out he is hopelessly outmatched. The villain decides to go ahead and kill him off, and it's over. The hero is dead.

Or is he? Perhaps he was Only Mostly Dead or Death Is Cheap. Maybe The Medic was able to bring him back. Either way, he starts to fight again and reveals that thanks to his defeat, he Took a Level in Badass and may have access to powers that he never had before.

Congratulations, he just Came Back Strong. It's not a Desperation Attack or Heroic Resolve, but a permanent increase in one's Power Level. It could be that dying has opened his mind to new possibilities, he literally trained in hell, he was granted access to new spirit powers, a MacGuffin is used to help him return and he gains special abilities from it, the process that was used to revive him also repaired and/or strengthened his body (or gave him a new body better than the old one), he struck a Bargain with Heaven or a Deal with the Devil in the Afterlife Antechamber (or a bereaved relative or lover made one on his behalf), or maybe his race just makes him stronger from death.

Villains do this a lot too, of course. Many are the heroes who have watched their nemeses perish, only to later find their foes risen from the depths of Hell with greater power than ever before.

Contrast Came Back Wrong and Resurrection Sickness. (Although, on some occasions this Trope is not mutually exclusive with those.) Compare Heroic Second Wind, which is similar to this without the nasty implications of death. Death-Activated Superpower is a subtrope. We Can Rebuild Him is a counterpart specifically concerning science and cybernetics.

As a Death Trope (or rather a reversion of it), many spoilers will be unmarked ahead. Beware.

Alternative Title(s): What Kills You Makes You Stronger