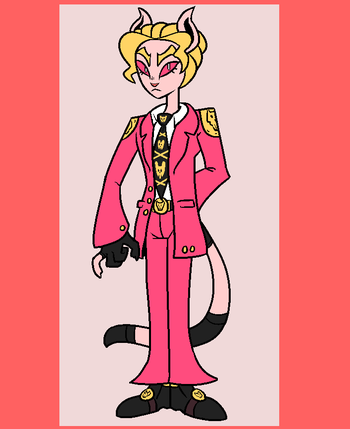 He just wants to live a quiet life
Advertisement:

is a Fusion Fic of Hazbin Hotel and Jo Jos Bizarre Adventure Diamond Is Unbreakable by WriteAnon.

Yoshikage Kira winds up in hell and, unsurprisingly, doesn't much care for it. With his new home totally incompatible with his preferred lifestyle, Kira is left with few options. But news of a hotel, one that redeems sinners, promises an alternative.

Another story by the same author, Helluva Job, is set in the same universe, and there's a sequel focusing on Vinegar Doppio, called Only the Results, now complete.

Archive of Our Own Link to the series here

A Peaceful Afterlife provides examples of: