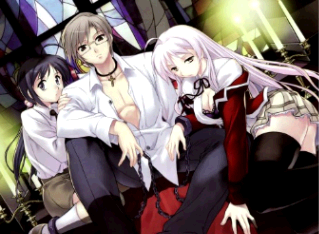 Aflame Inferno (불꽃의 인페르노) is a Manhwa written by IM Dal Young and drawn by KIM Kwang Hyun. This title is published in Booking in South Korea. This also has a Japanese language version published by Comic Valkyrie.

Aflame Inferno is about a self-absorbed high schooler and the nation's top model named Shi-Chan Kang, that gets caught in the middle of a battle between demons. Injured severely and near death, the demon Inferno merges with the student to save his life. Together they win the battle to discover that they are inescapably joined. The only hope of ever becoming separate beings again is to collect 1,000 Invento Hells and find the right spell of Resurrection. Can Shi-Chan Kang balance hunting down demons with his school work?

Manga seems to have been on hiatus since 2011 or earlier while the creators work on Freezing.

Aflame Inferno has examples of: