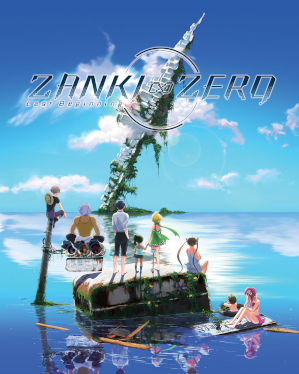 Zanki Zero: Last Beginning is a survival-themed role-playing video game developed by Lancarse and published by Spike Chunsoft. It was released on PlayStation 4 and PlayStation Vita.

On an island live eight human clones... humanity's last survivors. To ensure their survival, they have to develop facilities for daily life, raise their levels, explore dungeons, collect items, fight enemies... And, whenever necessary, revive deceased team members via cloning.

Notice the "whenever"—and not "when" or "if"—there? That's because the natural life span of each clone is only 13 days.

Their situation becomes more complicated when they receive the "Humanity Restoration" mission, that sends them to mysterious ruins that hold dark secrets to their pasts, as well the truth of what led to the one-day-long end of both humankind and the world it once inhabited.

From the crew who brought you Danganronpa, the game was released in Japan on July 5th, 2018, and in North America on April 9, 2019.