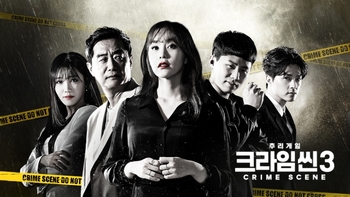 Crime Scene (Korean: 크라임씬) is a murder mystery variety show produced by JTBC. Real crime scenes from Korea and abroad are recreated, and cast members are trapped in that same space. These cast members then choose their "roles" and become suspects in these fictional murder cases, with the goal of identifying the modus operandi, finding the real killer among themselves, and solving the case by uncovering the truth of the crime through interrogations and collating evidences. The show is popular also for letting the audience participate in the game through real-time online voting. The show ran for three seasons from 2014 to 2017.

The game plays out as this: first, cast members are given a case briefing, which is a summary of events that occurred before the murder and a list of the possible suspects they can play for the reenactment of the case. Each player is then given ten minutes to investigate the crime scene for evidence, bringing a camera that can take up to ten pictures. The cast collates their evidence during the free briefing segment, and after this, each player secretly votes for who they currently think is the criminal. Should the cast have missed any evidence pointing to the killer, hints or additional on-site investigation is given. During the latter, each player heads to the interrogation room and calls another player in order to have a one on one discussion with them. After all of the players have had their one on one interrogation, each player then secretly votes for who they think is the final criminal, and the result of these votes determine the outcome of the game. The player who receives the most votes is "arrested" and locked in a makeshift prison. If the arrested player is the criminal, everyone who voted for that player receives a bag of gold coins. However, if the arrested player is not the criminal, the actual criminal wins all of the gold coins that the other players would have won.

Season 2 changes the game a bit by adding the role of the "detective", a role that is always innocent and therefore can be the only one that can request a one on one interrogation. Season 3 adds a "detective's assistant", who serves as the detective's Number Two and consultant.

Mango TV purchased the rights for a Chinese adaptation of the show, titled Who's The Murderer, which premiered in 2016.