He Was Right There All Along 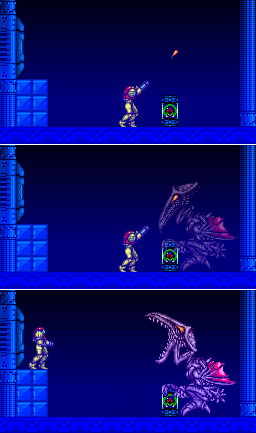 That's no light... it's a Space Pirate!
Advertisement:

You enter an expansive, seemingly empty room or area. Perhaps the dungeon music or sound effects stop playing. It appears that things are safe... but no! When you walk forwards, you trigger the boss to reveal itself, and it turns out that it was simply hiding. Maybe it was hiding on the ceiling, over the entrance to the room, or was camouflaged in the environment. Or maybe the boss was dormant and you've now just awakened it.

Common variations include a boss that doesn't appear until you try to leave the room, an underwater creature that doesn't respond until you swim around for a while, a boss that has disguised itself in the environment and won't reveal itself until you approach it, and so forth. If there is any sort of item, power-up, or Plot Coupon waiting in the Boss Room, it's guaranteed the boss won't show up until you collect it. Basically, this trope applies to any boss that simply isn't standing right there when you walk into the boss room, and requires some action on your part to trigger the boss fight.

No, you may not kill the boss by grenading the whole room before waking it up.note Even if you technically can, you're usually not supposed to, and it's either a bug or takes large amounts of blatant mechanics abuse.

For applications of the trope on a very large scale, see That's No Moon. Also see "Jaws" First-Person Perspective, Empty Room Until the Trap. Drop-In Nemesis sounds like an alternate name for this trope, but it is something else entirely. The same goes for Right Behind Me. Teleporting Keycard Squad operates under the same idea but for in-game enemies. See also So Near, Yet So Far.

This trope is one variation of Nothing Is Scarier.

Not sure where the boss is but these statues look cool. Wait... why is that one moving??

Alternative Title(s): She Was Right There All Along

Not sure where the boss is but these statues look cool. Wait... why is that one moving??