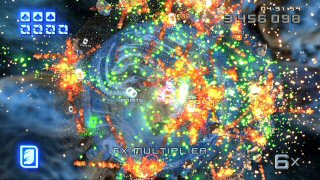 It only gets more intense...
Super Stardust HD is a downloadable game for the PlayStation 3 video game console developed by the Finnish company Housemarque. In Japan it is known as Star Strike HD.

The game objective is similar to the classic Asteroids (enemies) and Robotron: 2084 (controls) that requires the player to destroy virtually everything on screen combined with a frenetic pace that is more reminiscent of modern titles such as Geometry Wars. The game itself is an enhanced version of the classic Amiga game Super Stardust, itself a sequel to the game Stardust. Super Stardust HD was one of the games given free by Sony as part of their 'Welcome Back' package because of the Play Station Network intrusion.

The objective of Super Stardust HD is to score as many points as possible by destroying rocks and enemies. The player controls a small fighter that can move in any direction on a spherical shield surrounding a planet, while simultaneously firing in any direction independent of its movement. The ship is equipped with three unlimited-fire weapons ('Rock Crusher', 'Gold Melter', and 'Ice Splitter'), a limited arsenal of bombs, and a boost capability that grants a brief moment of invincibility and recharges after use. The player can upgrade their ship's primary weapons, equip the ship with a single-use shield, earn extra lives and points, and increase their supply of bombs, by collecting power-up tokens dropped by certain rocks and enemies. The game is over when the player has lost all of their lives.

The planetary shield that serves as the game's playfield is bombarded by waves of rocks that begin drifting in random directions around the planet. Each rock is made of one of three materials that is most easily destroyed by a particular weapon (though all rocks can be destroyed by any weapon). Additionally, various enemies (also susceptible to certain weapons) arrive in waves and attempt to destroy the player by either colliding with or shooting at him/her. Contact with these enemies or rocks will result in one life lost or if you have only one life it will result in a game over.

Super Stardust HD provides several modes of play, such as arcade, planet mode, and endless each with their own online leaderboards. The default game mode, Arcade, takes the player through a series of five planets, each consisting of five main phases, the last of which is a boss battle. Planet Mode allows the player to play any one of five planets in the same way, ending the game after the planet is complete. Both of these modes support both single-player and two-player cooperative play. Endless mode is where you face an endless wave of enemies where you try to get the highest score.

A successor was released for the PlayStation Vita, titled Super Stardust Delta. It simplified the weapons to two, fire and ice, and added some minigames that utilize the Vita's various features.