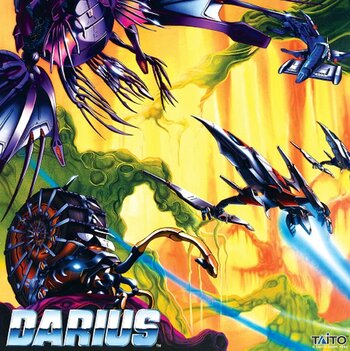 Darius is a series of Horizontal Scrolling Shooters developed by Taito.

The series usually involves war between the human civilization planet of Darius and a force of alien aggressors known as the Belsar. The protagonists pilot the iconic three-pronged Silver Hawk fighter starships and take on the Belsar army, most notably their fleet of "Huge Battleships" that are often designed after various marine life, such as coelacanths, sea turtles, octopi, and squids.

The Darius series has had many incarnations, including:

Has nothing to do with a certain Persian king or League of Legends champion.

The main page is over.

We are now rushing into the YMMV page. Be on your guard!
Feedback

Forget tuna sashimi, anyone in for fried mechanical fish?

Forget tuna sashimi, anyone in for fried mechanical fish?