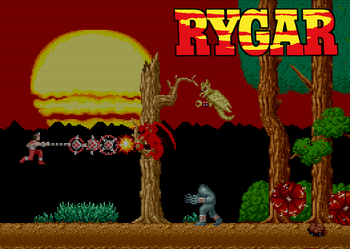 Rygar is an adventure video game created by Tecmo and first released in Japan under the name Argus no Senshi (Warrior of Argus). The player assumes the role of the "Legendary Warrior" who travels through a hostile, monster filled landscape, his only defense the mystical Diskarmor, a shield with a long chain attached to it.
Advertisement:

Rygar was first released as an arcade game, later ported to the Sharp X68000, Commodore 64, the NES, Sega Master System (Japan only; as Argos no Jūjiken), Spectrum 48K, Amstrad 6128 and the Atari Lynx. It was also included in a compilation of games called Tecmo Classic Arcade for the Xbox. The Lynx port of Rygar in TCA closely followed the arcade version, and the NES port was completely different. In November 2002, Rygar was updated and released to the PlayStation 2 as Rygar: The Legendary Adventure, and ported to the Wii under the title Rygar: The Battle of Argus.