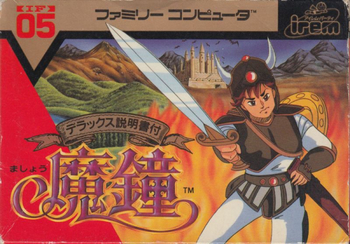 He certainly doesn't look confident in his sword.
Deadly Towers is an Action-Adventure game for the Nintendo Entertainment System, developed by Lenar and released in Japan by Irem in 1986 and in the U.S. by Brøderbund Software in 1987. It was originally to be titled Hell's Bells to match with its Japanese title Masho (trans. "evil bell"), but executives at Nintendo of America insisted that the title be changednote Despite the obvious pun, there's no evidence that Nintendo was afraid of a lawsuit from AC/DC.
Advertisement:

In the game, Prince Myer, on the eve of his coronation, is informed that a wizard named Rubas plans to overthrow Myer's kingdom by summoning an army of demons with seven magic bells. To ensure that his kingdom stays peaceful, Myer is charged with traveling to Rubas' castle, burning down the seven bells and destroying the bell tower, before ultimately confronting Rubas himself.

The game has a notoriously obtuse navigational structure, as to proceed through the game, you will sometimes find yourself entering rooms with no clearly marked entry or exit point. In addition, the rooms in some of the dungeons look the same, with only a difference in color palette setting them apart.

This game was reviewed by The Angry Video Game Nerd in Episode 54 of his series.