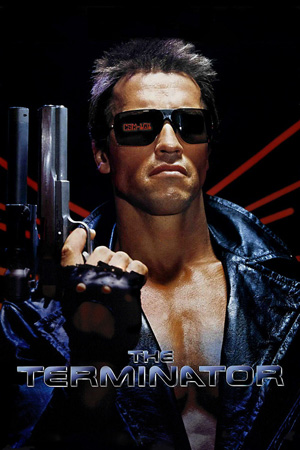 "I'll be back."
The machines rose from the ashes of the nuclear fire.
Their war to exterminate mankind has raged for decades, but the final battle would not be fought in the future.
It would be fought here, in our present.
Tonight...
— Opening title card
Advertisement:

The Terminator is the first film in the Terminator franchise and the second feature film directed by James Cameron. Released in 1984, the film differs from its successors in its Action Horror angle, compared to the more strictly action-focused direction of later installments.

One night in 1984, two men emerge naked from two separate electrical storms in Los Angeles. One, played by Michael Biehn, stays low and out of sight to avoid the authorities. The other, played by Arnold Schwarzenegger, picks up a phone book so he can find women named Sarah Connor— and kill them. When a young diner waitress also named Sarah Connor (Linda Hamilton) hears that two people with her name have been killed within a day, she begins to worry about the killer coming for her next. As the killer murders two people in Sarah's home in an effort to find her, Sarah hides in a nightclub; the killer catches up with her there, but she is rescued by the other man, Kyle Reese.

Kyle explains his story to Sarah after they escape the killer: in the near future, the United States will transfer control over its strategic defense to SkyNet, an artificial intelligence system that will promptly turn against its masters and attempt to Kill All Humans in a cataclysmic event that will become known as Judgment Day. Mankind will eventually defeat SkyNet, but before its final defeat, SkyNet will send a T-800 model Terminator — an android wrapped in human flesh to give it the appearance of a human — back in time to kill Sarah and prevent the birth of her son, John, who will become the leader of the human resistance. John will respond by sending Reese into the past to protect John's mother—and the timeline.

A sequel with a much bigger budget, Terminator 2: Judgment Day, came out in 1991.

Come with me if you want to trope:

Example of:
Come with Me If You Want to Live