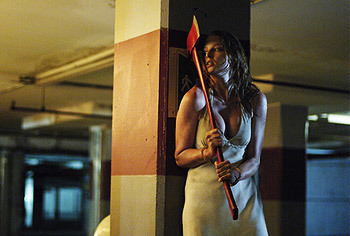 In any given movie or TV show, anytime there is a scene set in a parking garage, something bad is about to happen or has happened. Indeed, Nothing Good Ever Happens in a Parking Garage.

The reasons for this are many. A parking garage is an inherently boring place. There is nothing to do there but park one's car or drive it out of the garage. Since in a time-sensitive movie or TV show this is padding, no scene taking place in a parking garage will consist of a single character getting into a single car and driving away.

Typical events in the parking garage:

Related: Any scene set under an elevated section of highway.

While a person should always be alert of their surroundings while on their own alone in a public place, in Real Life a parking garage is just as safe as any of the other places you have to walk through to get to said parking garage. Walking through one alone at night, however, is scary because nothing is scarier than your imagination cooking up what ''could'' happen.

As with Abandoned Warehouse, they're great shooting locations. They usually have an open level, there's very little set dressing that has to be done, and they're not usually far from the studio itself. Letting a show film there is probably not only cheap for the production but more profitable that day for the garage than an empty level.

Not so much Truth in Television anymore. In the modern era parking garages have taken to installing cameras and hiring security or attendants, making it impractical to conduct illegal activity or mug someone in a parking garage.

Alternative Title(s): Nothing Good Ever Happens In A Parking Garage