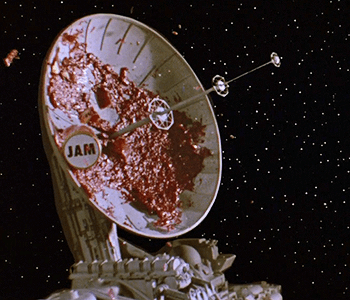 Anybody got some Radar Peanut Butter?
What made the German panzers so terrifying in World War II was not their heavy armor, their large guns, or their speed. In fact, the German tanks were generally mechanically inferior to their rivals. But the piece of equipment they had that their opponents lacked was a radio. Where the Allied tanks would have one radio per platoon, the Germans made sure each tank had a radio. This enabled them to demonstrate coordination beyond the ken of their opponents. So, from the opponents’ perspective, it seemed like the Germans were everywhere at once, finding every weak spot in the line, and driving deep behind the lines to sow chaos and terror.
That means that the true counter to the form of rapid attack made possible by Doctrine: Mobility is not some sort of novel weapon or armor. It’s the seemingly humble wide-spectrum communications jammer. If you can break the radios, the whole fast-moving apparatus collapses under its own weight into a confused mess. One with no other option than to engage in a frontal assault against the obvious strongpoints.
— Commentary on the "Advanced Subatomic Theory" technology from

All humans and animals rely on communication with others just to survive, let alone have a comfortable life. If this communication is sabotaged in any way, the results can be devastating for both sides of the party, simply because everyone wants to believe that their message went through unscathed and that the other person can and will respond. Nobody wants their letter to be stolen in the mail, nobody wants their call to be interrupted by a passing storm or cut wire, and nobody wants to be manipulated by someone else masquerading as their intended correspondent.

In this sort of situation, the communication isn't ruined by one of the parties themselves, like with Poor Communication Kills; instead, it's ruined by an outside force, whether it be a freak act of nature, a being with malicious intent purposefully causing trouble, or even just the result of the chosen messenger running into trouble and being unable to deliver the message. Similarly, it can occur between two people and a third party, or one person attempting to get a message out to the entire world, only to be prevented.

In this way, this trope can count everything from inconvenient and spontaneous signal jams, to a malicious third-party getting in the way.

This trope has several subtropes:

However, while the act is more often than not malicious, it can sometimes be done by the protagonist in a desperate situation, and can even be portrayed as good if it's the villains affected by the communication struggle. In wartime scenarios, this can be necessary to give one side an advantage, as pragmatic as it may be. Finally, the result may be anything from wacky hijinks ensuing, to evoking a strong sense of isolation, and anything in-between.

Compare with Forged Message and The Radio Dies First. Contrast Poor Communication Kills, where the communication failure is due to the character's own flaws, rather than any outside influence. This can be invoked by tropes like Fake Static and Cutting the Electronic Leash, and can cause a Suspicious Missed Messages scenario.

Finally, this is Truth in Television.

As SpongeBob and Patrick send each other bubbles containing their voices, Squidward messes with them, giving them mean insults in place of their original ones, which destroys their friendship.

As SpongeBob and Patrick send each other bubbles containing their voices, Squidward messes with them, giving them mean insults in place of their original ones, which destroys their friendship.