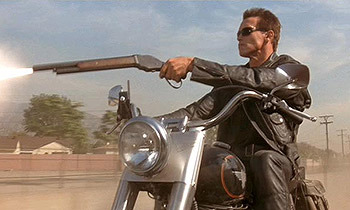 When a hero carries a handgun, he or she will tend to wield it and sometimes fire it in one hand. Perfect for still photo opportunities where the shooter's arm is bent above and behind their head and the gun is brought down to aim and fire. Even more cool is firing a gun sideways.

And sometimes the hero will have a gun in each hand. Or a sword in the other.

And then there are cases when someone is using a longarm one-handed. These weapons were never even meant for one-handed use, but it happens for some reason. Submachine guns are popularly shown this way, as they often look good in one hand, but they are still intended for two-handed use. This is the only way rifles and such can be used Guns Akimbo, but doesn't exactly look realistic.

The exception is if they are military or police officers, where they will use two hands. Unless they've gone rogue and/or are desperate.

Justified in most westerns, as the single action triggers used at the time made it more popular to fire with one hand and fan the hammer with the other, although films depicting one-handed use of revolvers will often not show the hammer being fanned at all. There's also a school of thought that says aiming one-handed whilst standing sideways-on to your opponent presents a narrower target and thus makes you harder to hit; whether this makes up for your own increased difficulty in hitting anything is a matter for opinion. Before a few decades ago, one-handed pistol shooting was Truth in Television; firing with one hand while presenting a relatively small part of one's body to the enemy was conventional wisdom among shooting instructors and taught in military manuals. It was not until The '60s that more stable, two-handed stances such as the Weaver or isosceles stances became popular.

For really big melee weapons being used in one hand, see One-Handed Zweihänder. Compare One-Handed Shotgun Pump, which is for reloading firearms one-handed rather than firing.

Alternative Title(s): One Handed Is Cool