Come with Me If You Want to Live 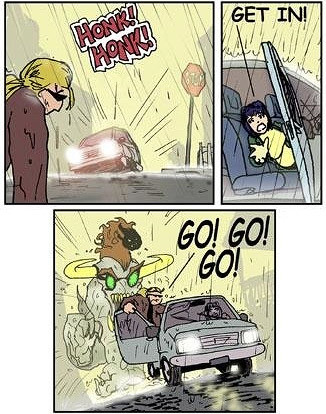 "Come with me if you want to live!"
— Random badasses in pretty much every Terminator work

Alice has found herself in a sticky situation. Maybe the Mooks are closing in, or even worse, the Big Bad himself. She's on the wrong end of a Run or Die battle, and running isn't working out too well. Enter Bob — whom Alice may have never met before — with a speedy getaway at the ready. Bob could be a guy on a horse, in a car, on a motorcycle, a wilderness expert, or even a made-of-iron cyborg Stone Wall.

This is distinguished from The Cavalry because the unexpected rescuer is:

All of these factors mean that it's likely to occur much earlier in the plot than the arrival of The Cavalry.