Manga / Highschool of the Dead 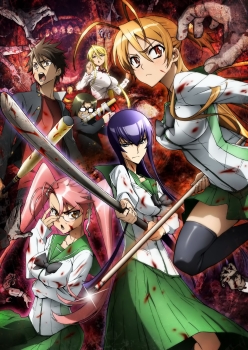 Boobs won't save you now.
"But our world as we knew it had already been completely destroyed."

Imagine waking up one day, going to school, and going to the roof of said school to pine over your lost love. Then imagine looking down and seeing a teacher's fingers get bitten off by a trespasser. Then imagine seeing that teacher literally eat another teacher. Now imagine rushing back into school to get your ex-love and her boyfriend to save them, all while fighting "not zombies". You try to call for help, but the lines are busy because of emergencies all over town. When you finally get to a television to find out what is going on, you learn that this nightmare is happening everywhere.

Imagine all that, and you would have the beginning of Highschool of the Dead. In a new world of surviving "them", Takashi Komuro and a group of unlikely allies must learn to adapt and change so they can survive, but will they like what they become? This manga, written by Daisuke Sato and drawn by Shouji Sato (no relation), is filled with monsters both living and nonliving, loads of guns, and big breasts on nearly every woman who is old enough to have them.

An anime adaptation by Madhouse* with assistance from Asahi Production and Dogakobo aired during the summer of 2010 under the direction of Tetsurō Araki, who also directed Death Note for Madhouse, and would later direct Guilty Crown for Production I.G, and Attack on Titan and Kabaneri of the Iron Fortress for WIT Studio. The anime was licensed and dubbed by Sentai Filmworks in 2011, premiered on The Anime Network, and even streamed on VIZ Media's Neon Alley service for a while.

In March 2011, the manga was put on hiatus; it had fallen into Schedule Slips before, but Chapter 29 was the final nail, as it concluded the number of chapters needed for Volume 7. Reasons for the hiatus are scarce: Daisuke Sato doesn't seem to have been writing any other manga series at the moment, but Shouji Sato was still seen working on Triage X, a series that he produces by himself. Shouji was supposedly also taking his time with research on weapons, vehicles, and so on for future HOTD chapters. He even colored all seven volumes of HOTD during the hiatus. In April 2013, the HOTD team released the manga's 30th chapter, then put the series back on hiatus. Almost four years later, on March 22 2017, Daisuke Satō tragically passed away from heart disease. Shouji Sato later confirmed they would not be continuing the series, leaving it understandably Cut Short.

Highschool of the Dead contains the following tropes:

"Blood and guts and boobs and butts, and I just wanna make your head explode"
Feedback

Highschool of the Dead

Boobs do NOT work that way.

Highschool of the Dead

Boobs do NOT work that way.