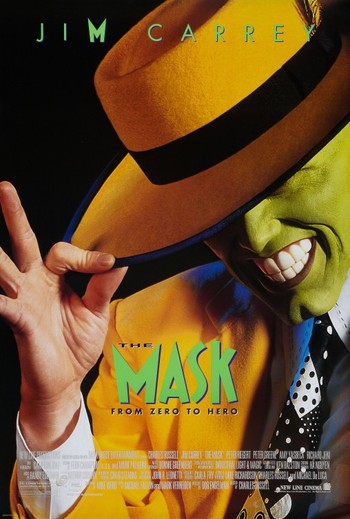 Ah, yes... The Mask, a fun little Jim Carrey romp from 1994. It's one of his works from early on in his A-list film career, specifically his first film to arrive in theaters after Ace Ventura: Pet Detective. It's built on slapstick comedy and Jim Carrey contorting his face a little more than usual, and turned out to be very popular. It is based, Film of the Book style, on the comic book of the same name. Well, sort of. The original is not harmless slapstick, fitting much better in the comedy horror genre.

The story of the film follows twenty-something Edge City banker Stanley Ipkiss as he finds a magical mask, endowed with the powers of the Norse Trickster God Loki, which effectively makes the wearer completely immune to absolutely everything, and capable of practically anything. In Stanley's case, this manifests as gaining the Reality Warper abilities of his beloved classic Tex Avery characters (stretching, shapeshifting, bouncing back from Amusing Injuries, and the like). While not quite reaching With Great Power Comes Great Insanity levels, he does use it to get back at the people that bullied the shy reserved nice guy Stanley, and to woo nightclub-singer Tina Carlyle (Cameron Diaz in her feature-film debut). When other less savory individuals get hold of it, the results are not so amusing.

Following the success of this film was a well-received (and often very naughty) Saturday morning animated adaptation in 1995, which lasted until 1997.

It had a Carrey-less pseudo-sequel, Son of the Mask, in 2005, which starred Jamie Kennedy and a CGI baby. It was a complete disappointment both critically and commercially.

Not to be confused with Mask, a 1980s drama about a young man with a facial deformity and his family, the '60s Canadian horror film The Mask, or the toy-based cartoon M.A.S.K..

In The Mask, the titular character does a rendition of "Cuban Pete" to evade the cops.

In The Mask, the titular character does a rendition of "Cuban Pete" to evade the cops.