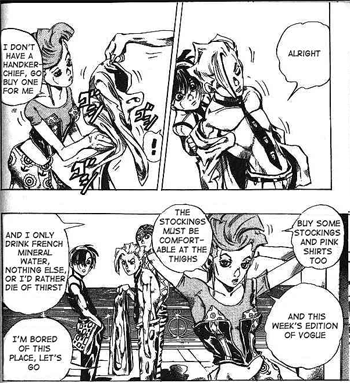 And get me a better picture caption. This one goes horribly with my outfit.

Generosity is considered a good thing. Milking generosity is not. Yet some characters do it anyway.

Say Bob offers Alice a little gift, or agrees to do Alice a favor, but Alice asks for more gifts or favors from Bob, or someone else, knowing she is likely to get it.

The reasons for this usually fall under varying degrees of gluttony, Greed and It's All About Me. Quite often those receiving these extra demands will feel obligated to fulfill them anyway, especially if these characters are Extreme Doormats, even when they feel like they are being taken for granted.

Usually, this is portrayed as being a very Jerkass thing to do.

Compare Moving the Goalposts, The Prima Donna, All Take and No Give (a variation of this with relationships). The Farmer and the Viper is a more extreme and outright villainous variant.