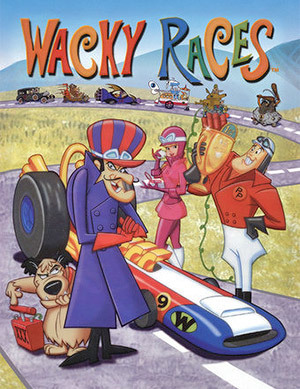 Derived from the live-action comedy film The Great Race, Wacky Races is a Hanna-Barbera cartoon production where drivers in 11 outlandish vehicles compete in absurd cross-country races. Hilarious hijinks ensue, partly due to whatever area they are racing through, but mostly due to the absurd lengths to which one racer (Dick Dastardly, the quintessential Dastardly Whiplash) goes to cheat and sabotage the race, even though these attempts backfire in the end and cause him to always finish in last place (if he even finishes at all).

Hanna-Barbera gave co-credit for it to Heatter-Quigley (the producers of The Hollywood Squares) on CBS Saturday morning in 1968, where Wacky Races marked the end of H-B's Super Hero adventure cycle and a return to slapstick comedy. Heatter-Quigley was to have provided a live game show segment in which children won prizes for predicting the outcome of the races; CBS nixed the plan, but Hanna-Barbera kept Heatter-Quigley in the end credits (even though the end copyright still reads "© 1968 by Hanna-Barbera Productions"). Subsequently, Peggy Charren, head of the organization Action for Children's Television, blackballed the show, charging that it enticed kids to make monetary wagers on the races' outcomes.

Many of the visual gags look suspiciously similar to those in Road Runner cartoons, including the use of painted scenery that people can enter, and fake railroad tracks that suddenly have trains running over them (and Dick Dastardly). Michael Maltese, who wrote just about all of the Chuck Jones Road Runner cartoons, was a writer for Wacky Races.

The six voice actors were Daws Butler, Don Messick, Paul Winchell, Janet Waldo, John Stephenson and Dave Willock as the Narrator. In 1969, Wacky Races was rerun on CBS, along with its two spin-off series: Dastardly and Muttley in Their Flying Machines and The Perils of Penelope Pitstop. (All three shows were widely syndicated in the 1970s and '80s.) In 1990, the cartoon was revived as Fender Bender 500, a part of the anthology show Wake, Rattle, and Roll. In this incarnation, only Dastardly and Muttley returned (this time with a Mean Machine expy called the "Dirty Truckster") — the roster was otherwise made up of classic Hanna-Barbera all-star characters like Yogi Bear and Huckleberry Hound.

The Wacky Races video game adaptation for the Dreamcast is notable for being one of the first games to use Cel Shading.

A reboot of the series was announced in 2016 and started airing in 2017. Additionally, a new comic book reinterpretation by DC Comics called Wacky Raceland mashes the show up with a Mad Max inspired setting.