Western Animation / Dastardly and Muttley in Their Flying Machines 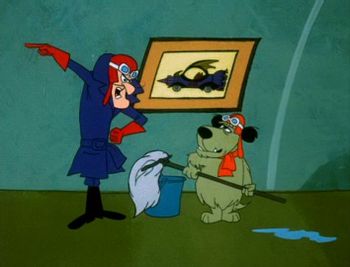 Nab him! Jab him! Tab him! Grab him! Stop that pigeon, now!

One of two Spin Offs from Wacky Races, this series is best remembered for its bizarre aircraft designs. Dick Dastardly leads the Vulture Squadron in pursuit of the courier Yankee Doodle Pigeon. The squadron's other members are Dastardly's partner from Wacky Races, Muttley, a snickering dog always begging for a medal; Klunk, an aircraft mechanic who speaks mainly in vocal sound effects, and Zilly, a nervous coward whose only redeeming virtue is his ability to translate Klunk's speech for Dastardly. The Mean Machine, Dastardly's car from the Wacky Races, can be seen frequently in this series as well.

Although this cartoon is set during World War I, Dastardly always has access to a telephone, even in flight, over which the general communicates with him. Just as Dastardly never won a Wacky Race, he never catches the pigeon. There are two Dastardly & Muttley cartoons along with "Wing Dings", which are short comedy blackouts. A supporting segment, Magnificent Muttley, concerns Muttley's flights of heroic fantasy.

The series' entire voice cast consists of Don Messick (Muttley, Klunk and Zilly) and Paul Winchell (Dick Dastardly and the General). Messick even provides the falsetto voices of Muttley's girlfriends in the Magnificent Muttley segments.

A comic series based on the original series titled Dastardly & Muttley was released in 2017, written by Garth Ennis— yes, that Garth Ennis. In it, Dick (known as Lt. Col. Richard "Dick" Atcherly) is an Air Force Pilot while Muttley is his partner who ends up fused with his dog due to Applied Phlebotinum that results in cartoon physics and lunacy manifesting in the real world. Unlike the original series, it is set in contemporary times.

Example of:
Now You Tell Me