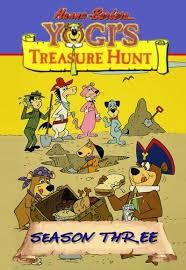 Yogi's Treasure Hunt (1985-1988) was one of the earliest segments of The Funtastic World of Hanna-Barbera, a syndicated block of Sunday morning cartoons in the mid 1980s. In each episode, Yogi Bear and his friends received an assignment from Top Cat to find a lost treasure. Along the way, our heroes had to outwit Dick Dastardly and Muttley, who sought the same treasure after eavesdropping on Yogi's group.