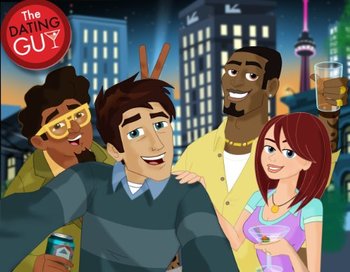 Left to right: VJ Mendhi, Mark Dexler, Woody Jenkns, and Sam Goldman
"Young and Useless, Restless and Wild,"
"We're wasting away, but we do it in style,"
Advertisement:

The Dating Guy is a Canadian animated TV series from Entertainment One and MarbleMedia created by Mark Bishop and Matt Hornburg. It tells the story of Mark Dexler (voiced by Creator/), a guy looking for love in all the wrong places (and usually the strange places too).

The series started in 2009 and ended in 2011 with 26 episodes. It can be seen on Teletoon at Night and Hulu

The Dating Guy provides examples of: