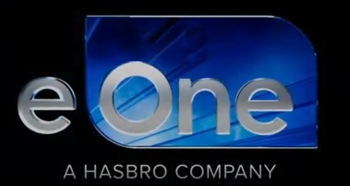 Entertainment One Ltd., also known as eOne, is a Canadian multinational entertainment company that currently serves as the content production/distribution subsidiary of American toy manufacturer Hasbro. Based in Toronto, Ontario, Canada, the company is primarily involved in the acquisition, distribution, and production of films, music, and television series. The company was listed on the London Stock Exchange until it was acquired by Hasbro in December 2019.

The company was originally founded in the early 1970s as Records on Wheels Ltd, which eventually became a major wholesaler of CDs, DVDs and other multimedia. The company's CEO Darren Throop joined ROW in 2001 and oversaw it's transformation into the eOne of today. The first major acquisition was a home video distributor called and record label called Koch Entertainment in 2005, two years later in 2007, it purchased Canadian film distributor Seville Pictures (formerly known as Malofilm and Behaviour) and British company Contender Entertainment Group (best known for Peppa Pig).

In 2008, It acquired two Canadian television studios, Barna-Alper Productions (producer of Da Vinci's Inquest) and Blueprint Entertainment (of Kenny vs. Spenny and The Best Years fame), which were merged together to form eOne Television. As well as a international distributor called Oasis International. It also expanded into the Australian market with the purchase of local distributor Hopsoctch.

The first most notable acquisition was acquiring the remains of Alliance Atlantis (or more specifically their film distribution division, Alliance Films, known for being the Canadian distributors of Miramax and New Line Cinema) from Goldman Sachs in 2013 (who had purchased the entire company in 2007 along with the now bankrupt Canwest (then owners of the Global Television Network), Goldman already sold Alliance's non-Canadian international assets to budget DVD distributor Echo Bridge and the rights of the CSI Verse to CBS). As a result of this acquisition, eOne started using Alliance's 2004 fanfare for their own Vanity Plate.

In 2014, eOne acquired Phase 4 Films, a company that produced low budget films and mock busters and was perhaps best known for it's children's division Kaboom Entertainment (which distributed content from Nelvana). In 2015, they acquired Mark Gordon's production company (best known for Criminal Minds and Grey's Anatomy) and increased their affiliation with the Peppa Pig franchise by purchasing the cartoon's creator Astley Baker Davies. It also formed a relationship with Steven Spielberg in December 2015 to form Amblin Partners and serves as an investor.

In 2019, Hasbro acquired the company, resulting in Hasbro folding it's existing content assets into eOne, the music division (including the Death Row Records catalog) was sold to a consortium led by Blackstone in 2021.