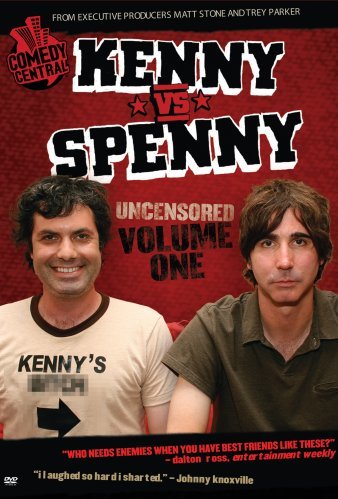 The Ultimate Face-off
Since the beginning of time, mankind has been forced to compete for survival. This spirit of competition has reached a pinnacle in the relationship of two best friends who battle against each other. Why? Glory for the winner, humiliation for the loser....
— The Intro
Advertisement:

Remember your buddy in college, the one you used to make all the really stupid bets with, usually after a couple of rounds at the bar? Do you ever think back and wonder just how stupid you must have been to try some of those stunts? Aren't you kind of glad that the only people who know about them now are people you don't see anymore?

The difference between you and the two guys who make Kenny vs. Spenny is 1) they're still doing it and 2) they air it on TV.

Kenneth "Kenny" Hotz and Spencer "Spenny" Rice have, since 2002, been attempting to out-do each other in juvenile, frequently bizarre competitions. How bizarre? Some of the competitions include:

The loser, as determined by the rough rules set out at the beginning, suffers a humiliation determined by the winner. The loser of the "most convincing woman" competition, for example, had to walk in drag through an area known for prostitution. On the rare occasion of a double forfeit, the humiliation is set by the filming crew; these are some of the most amazing moments of the show, while draws impose no humiliations.

The real draw is not so much who might win or lose, but the dynamic between the two men's personalities. Spenny is rather keen on establishing rules and sticking to the letter and spirit of the competition. Kenny, on the other hand, uses unorthodox approaches frequently and will cheat if he feels he can manage it - the film crew does not "snitch" and Spenny does not see the footage before the end of the competition.

This Canadian show has inspired several versions in other countries; see the other wiki

In December 2010, Kenny and Spencer both announced that the show is canceled, and it ended with a big Christmas special.

In 2012 Kenny uploaded every single episode of the show (including some never aired) onto his YouTube account. Tragically they were all taken down due to meddling from higher ups, but they're back up as of 2018.

Kenny vs. Spenny provides examples of the following tropes: