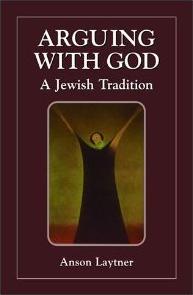 And they argue with anyone.note Really? This is the best picture you could come up with?
"Two Jews, three opinions."
— A saying
Advertisement:

Um, okay... For whatever reason, Jews and arguing go together like Passover and matzah.

You call that a simile?

Hey, I'm trying. Give me a break. This probably has to do with the layout of the Talmud, which contains a whole lot of back-and-forth arguments, arguments about what other people are arguing about, and often not even a resolution to the arguments. (Or an argument if there is an argument or not...)

Oho, so you're the big gemarakupSorry, what? (talmudic scholar) now?

...I have no idea what that means. Anyway, this is a joke more common among Jews themselves than among gentiles [non-Jews]. Such conversations are generally (in fiction) liberally peppered with Yiddish as a Second Language.

That's your gevaldigenote (terrific) description? If I had known you'd write such dreck, I wouldn't have come over.

I'm trying not to spend too much time on this. Give me some slack.

So you don't think our culture is worth your time?

That's not what I meant. I just have other things to do.

So you just come here to bang a kettle? A—

Dammit, what the hell is your problem? I get just a few lousy minutes out of my busy day to make this, and that's not good enough for you?

Oh, you call yourself busy, just sitting around opening tab after tab—

Shut up! You don't know what I have to go through every day to…

Khalas, shneychem, KHALAS!note Enough, both of you, enough! Look, achinote bro, while those two chofrim basechelnote talk too much in an annoying way; literally digging the mind, you can compare Lower-Class Lout, Badass Israeli, Jewish Complaining, Rambunctious Italian...

What about Alter Kocker, or Passive-Aggressive Kombat?

Zeh Tropes shel ashkenazim be-amerika, ya ben zona!note These are American Ashkenazi tropes, you son of a bitch! You Americans think that all Jews are exactly like the Nebbish, Ashkenazi frayerimnote suckers, though with a much more negative connotation compared to the US you call Jews...

And what would you know from comparisons, anyway, especially when they're given by this Schwartze-khayehnote Prejorative Yiddish term for Mizrahim, which amount to around one-half of Israel's Jewish population?

Boh enah, ani efarek'cha ta-tachat!note Come here, I'll rip your ass off! Do you know where I served in the Army? I served in Golaninote A very prestigious combat brigade in the IDF!