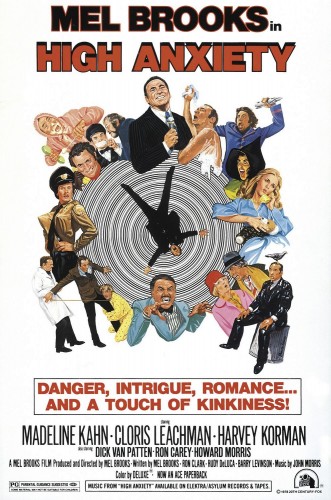 High Anxiety is a 1977 comedy film directed by (and starring) Mel Brooks. It is an Affectionate Parody of the films of Alfred Hitchcock. While there are numerous allusions to almost every Hitchcock film, the main plot and setting are taken from Spellbound and Vertigo. There are also minor allusions to films not directed by Hitchcock, such as The Pink Panther and The Spy Who Loved Me, with characters resembling Jacques Clouseau and Jaws.

Wentworth wants to leave the institute but Diesel refuses to let him. She agrees after an argument. When Wentworth is driving home that night, his radio blasts rock music loudly and will not shut off. He is trapped in his car, and he dies from an ear hemorrhage. The following day, Thorndyke books a room in the vertigo-inducing Hyatt Regency (hotel of) San Francisco. He is suffering from a sense of vertigo but finds his room located at the top floor.

Thorndyke is contacted by Victoria Brisbane (Madeline Kahn), "the Cocker's daughter". She wants him to take a closer look at her father's case. He does so and discovers that his patient may not be the actual Brisbane. The Institute apparently could use the money from the Brisbane family, and keeps the real Arthur prisoner. Diesel decides to get rid of her boss. She hires the assassin Braces (Rudy De Luca) to frame Thorndyke for murder. Richard has to clear his name before resolving the case.

The Psycho shower scene parody uses the shrill cries of an angry bellhop in place of the strings: "Here! Here's your paper! Here's your lousy, stinking paper! Happy now?" Thorndyke's reaction? "That boy gets no tip."

The Psycho shower scene parody uses the shrill cries of an angry bellhop in place of the strings: "Here! Here's your paper! Here's your lousy, stinking paper! Happy now?" Thorndyke's reaction? "That boy gets no tip."