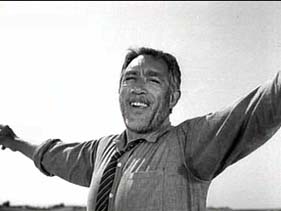 Did you say....dance?!
"Life is trouble, only death is not; to be alive is to undo your belt and look for trouble."
— Alexis Zorba
"God has a very big heart, but there is one sin he will not forgive! If a woman calls a man to his bed, and he will not go."
— Alexis Zorba

Zorba the Greek was a 1964 film, starring Anthony Quinn in the titular role. The movie was based on a 1946 novel (of the same name) by Nikos Kazantzakis, and was later developed into a Broadway show after the movie's critical acclaim. Aside from Quinn, it also stars a number of actors who, while not familiar to American audiences, achieved significant success and fame in their native countries (Alan Bates in the United Kingdom, Irene Pappas and Sotiris Moustakas in Greece). The film was directed by Michael Cacoyannis, previously known for such film as Stella (1955) and Electra (1962).

The film centers on sober young half-Greek/half-English writer Basil (Alan Bates) and the extremely animated, boisterous and (sometimes frighteningly) jovial Zorba. The two initially meet as Basil, suffering from intense writer's block, elects to make the journey to the island of Crete, where his father owned a lignite mine and some land. Rough seas delay his ship and while he takes shelter, the eccentric Zorba enters from the rain. Very forward, Zorba asks to be allowed to come with Basil, citing his skill at mining and Basil, seeing the usefulness of a local, agrees.

Basil's mine is in an extremely poor village, and a long-marooned Frenchwoman (and former cabaret singer) runs the hotel where the two initially stay. As the mine begins to operate, Basil's own prim, bland personality and extreme self-restraint clash with the eccentric Zorba's dynamism. Zorba drinks, philanders and dances too much, but at the same time is an exceptionally fearless worker (especially useful in the crumbling mine.) Zorba constantly goads Basil to live his life, enjoy his youth, but is met with intense resistance. When a young, beautiful widow in the village is hounded by the village men for rejecting their advances, it is Zorba who defends her, and when she shows interest in Basil, it is Zorba who pushes Basil to pursue her.

Ultimately, the mine requires beams to reinforce the gallery, and the only timber available are from a forest owned by the mountain monastery. Zorba devises a plan (that involves intoxicating and befriending the monks, and an overhead cable to essentially zip-line the felled trees to the base of the mountain.) He asks Basil if he trusts him, and when he receives a positive, asks why. Basil replies, "because you're you." When Zorba warns his schemes could ruin him, Basil replies, "I'll take that chance." Encouraged, Zorba engages in a euphoric display of dance, working himself into a frenzy and eventually passing out in the sand. He reveals that, when his son died, he was unable to express the incredible sorrow he felt and began to dance. Those around him believed he had lost his mind but, as Zorba said, it was the only way to alleviate the pain.

Growing restless with his long-standing affair with the Madame Hortense (the frenchwoman), Zorba goes into town to purchase the materials while an increasingly anxious (and broke) Basil waits back at the mine/village. While Zorba is gone, he spends much of the money on booze and women, writing home to Basil about it. When Hortense, already thrice abandoned by men, asks what the letter says, Basil is forced to improvise on the spot and create an entirely different letter (thus breaking him of his writer's block.) Furthermore, lonely and isolated, Basil finally visits the widow at her remote home. Their romantic encounter is spotted by passers-by who relay the news to Mavrandoni's son, who promptly commits suicide in shame. The following morning, Zorba returns home with all the materials (at discount prices) and gifts for everyone. Soon after, on their way to church, the widow is isolated by a vengeful mob and attacked with stones and then knives. Zorba initially fights her attackers away, but as they try to leave, Mavrandoni kills her. Soon thereafter, Madame Hortense dies of influenza that she caught while waiting for Zorba to return. Despite his philandering, Zorba remains with her till her last breath, and after she dies, takes her parrot away as the villagers salvage all her belongings before the state can seize them.

Depressed, the two carry out their plan to bring timbers down the mountain. After gathering the entire village and monastery, they attempt to make the zip-line work. It fails twice, sending the monks delivering blessings diving into the river, while on the third time, the entire zip-line and all its support poles collapse. Watching the dust still settle and the villagers fleeing far into the distance, the two are left alone, where Zorba suddenly worries about the lamb on the spit burning. The two sit down, and after a brief chat, Zorba asks when Basil will return to England, and whether Basil is angry with him. Basil replies that he is not and after taking a long look at the ruins, turns to Zorba and asks, "Teach me to dance... will you?" Zorba is overjoyed at this request, and they begin to dance and laugh at their rather grim situation. The film ends with the two dancing alone on the beach by the ruins of the mine.

Zorba is a character obsessed with living life to its absolute fullest, whether it be labor, music, love or any number of things. The character, in many ways, has come to serve as an avatar for the sort of Early Modern Greek zeitgeist. Zorba is boisterous, heavy-drinking, philandering and prone to erratic work habits, but he is simultaneously fearless, bound to a strict code of chivalry, and does not let his tortured past show on the outside. During one outburst over his service in the Balkan Wars, it is revealed that he was wounded multiple times and committed a number of war-time atrocities in the name of his country. Simultaneously he is both a patriot, yet acutely aware of the arbitrary nature of ethnicity and has, in his age, given up judging people on such things.

The character Zorba from the novel is, allegedly, based on a real individual Kazantzakis encountered while travelling around remote, northern Greece.

The movie is decidedly better known than the original novel both in and outside Greece. Quinn, himself Mexican, was defined by the role in Greece to the point that, later in life, honorary citizenship was considered. It is Quinn's most critically acclaimed work, garnering him several nominations for multiple awards.

This novel and or/film contain examples of the following tropes: