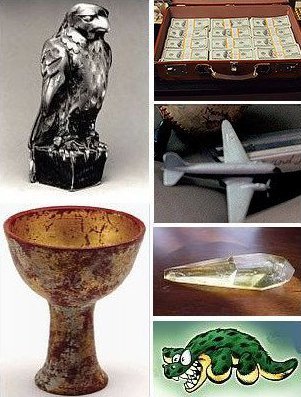 A MacGuffin, every one of themnote Left column: The eponymous bird from The Maltese Falcon; the true Holy Grail from Indiana Jones and the Last Crusade. Right column: the "briefcase full of money" used in innumerable thrillers over the decades; Kate's toy plane from Lost; the crystal shard from The Dark Crystal; "The Winslow" from Phil Foglio's Buck Godot.
"In crook stories it is almost always the necklace, and in spy stories it is most always the papers."
— Alfred Hitchcock
Advertisement: