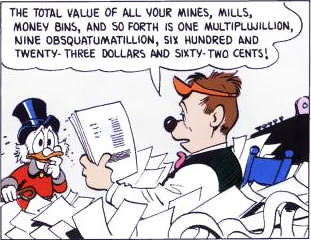 It took him eleventeen days to count it.
Fry: One. Jillion. Dollars.
[audience gasps]
Auctioneer: Sir, that's not a number.
[audience gasps harder]
— Futurama, "A Fishful of Dollars"

When your notation isn't enough, it's better to make up new numbers on the spot.

Of course, there are plenty of real large numbers ending in -illion, usually formed with boring Latin prefixes - The Other Wiki, as always, has a list.

Most are just non identifiable by the layman.

Ridiculous Future Inflation can be a cause of this. Usually a Comedy Trope. Justified when a character really uses another notation, or when he has to make a number up because what he's describing is even bigger than a googolplexnote (the highest rank in the "official" notation compiled by The Other Wiki). For money, compare Zillion-Dollar Bill and contrast Undisclosed Funds. For units of measurement, compare Fantastic Measurement System.

This trope is not called imaginary numbers,

because mathematics already have those as a concept. These are far more useful, especially when computing the square root of a negative number, and are basically the mathematical foundation of quantum mechanics, electronics, telecommunications and signal processing.