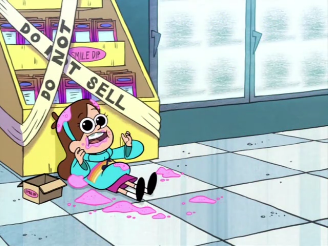 Yep. That sums it up.
The fifth episode of Gravity Falls.

Grunkle Stan tells the employees of the Mystery Shack that they should clean the bathroom while he's out. (Soos: "Yes, sir!" Wendy: "Absolutely not")! Wendy decides to show Dipper and Mabel the ladder that goes to the top of the roof. The two hold a pine-cone throwing contest. Wendy gets a bullseye, and Dipper hits a car, causing her to hi-five a smitten Dipper. However, Wendy's friends come over, so she decides to leave Dipper and Mabel by jumping on trees down to the van. Mabel suspects Dipper of having a crush on her. Dipper is defensive, stating that he does not lie awake thinking about her.

But, it turns out that he actually IS thinking about Wendy at night. "Uh, oh".

Wendy and Mabel have a dance party "for no reason". Dipper is asked to dance, and Mabel reminds him about an old dance he used to do, the "Lamby Lamby Dance". Dipper asks Wendy if they can tag along with her on her hangout with her friends. To do this, he lies about his age (stating that he is 13). Her friends come over, and Dipper meets this eccentric cast of teens. Forced to sit in the back with Mabel, they take off in the busted down, written on minivan, for an abandoned convenience store ("Thompson! Thompson! Thompson!")

Meanwhile, Stan cannot find the remote, and refuses to get up. He has to watch "The Duchess Approves", a film about the life of royalty. He does not take this well at first, but becomes hooked into the movie.

After arriving at said convenience store (Dusk 2 Dawn), Dipper decides to slip over the fence, to prove that he is not afraid to Wendy. Dipper then decides to slip in the locked convenience store that one of the teens could not unlock, and is rewarded with praise from the teens. Said teens wind up going insane, eating expired food, putting mints in soda to see it explode, and having fights with bags of sugar. Mabel decides to eat some "Smile Dip", which was banned in America. Mabel consumes the entire sugar packet, and undergoes strange hallucinations, including dogs and riding a four headed dolphin with hands in its mouths. ("ONWARD AOSHIMA!") Dipper is told to go get ice for two of the teens... and winds up seeing a recreation of the nervous system. In monster form. He distracts the teens with "Dancey Pants Revolution" ("the game that tricks you into exercising!"). Dipper then winds up finding the outlines of two bodies on the floor. One of the teens wants to lie down in them, and Dipper, already knowing that something's not right in the store, asks everyone to reconsider "what if this store is really haunted". He is laughed off and earns the title of "Captain Buzzkill" from all of the teens, including Wendy. Enraged at accusation of cowardice, Dipper lies down himself.... only for the outlines to disappear.

Soon, the store goes insane. Tambry is trapped in the security camera (with her screams being recorded in her cell phone), another is put on a cereal box IN THE CEREAL, and another is forced INTO "Dancey Pants Revolution", and tries to dodge the arrows. Then a ghost possesses Mabel, who tells them to leave if they apologize. Dipper apologizes, and the ghost tells them that hot dogs are 50% off. However, it was a trick, and a teen is turned into a hot dog. The store is turned upside down, and Wendy and Dipper have to hide out in a squishee machine. However, Dipper realizes that this was because the ghost may be irritated by "what teens do", and decides to out himself as 12 years old.

Then, Mabel is released.... and the ghosts were just two senior citizens who, in the 1990s, were irritated by teens, and had fatal heart attacks because of "rap music" ("Homework's whack and so are rules, tucking in your shirt's for fools!") Dipper has to dance his way out.... with the "Lamby Lamby Dance" that he was forced to perform during his younger years. The teens are freed, Mabel gets off her sugar trip, and Wendy thanks Dipper, and tells him that they should hang out more often. She is the only one who witnessed his humiliating dance, and tells her friends he attacked the ghosts and fought them off instead, which thoroughly impresses them.

Grunkle Stan, is forced to watch a soap movie, called The Duchess Approves, while watching the Black and White Period Piece Old Lady Boring Movie Channel. He ends up becoming incredibly invested in the film, right up until the end.

Example of:
Soap Within a Show

Grunkle Stan, is forced to watch a soap movie, called The Duchess Approves, while watching the Black and White Period Piece Old Lady Boring Movie Channel. He ends up becoming incredibly invested in the film, right up until the end.