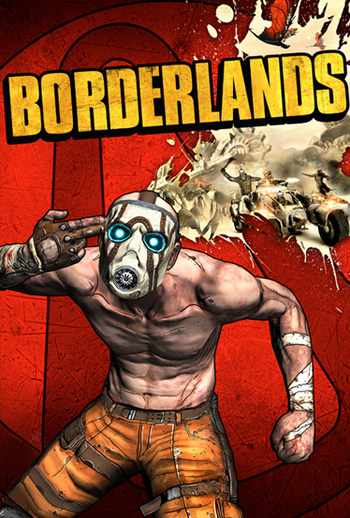 There ain't no rest for the wicked...
"87 Bazillion Guns!"
Advertisement:

Borderlands is the first game in the Borderlands series, a Space Western Hero Shooter with RPG Elements (or an Action RPG with FPS elements, though Gearbox themselves call the game a "Role Playing Shooter") for Xbox 360, PlayStation 3, Windows, and OS X developed by Gearbox Software — creators of the Brothers in Arms series and the three expansion packs for the original Half-Life.

The game concerns four different adventurers who arrive on the desert planet of Pandora seeking the Vault: a legendary alien treasure cache filled with weapons, alien artifacts, and wealth beyond imagining. Initially, it seems like the only thing to worry about will be the scores of bandits that run rampant over the planet; however, the player soon comes into conflict with the Atlas corporation, who have dispatched their elite squad known as the Crimson Lance, led by the ruthless Commandant Steele, to capitalize on the power and riches offered by the Vault. Aided by the mysterious "Guardian Angel", the player sets out into the borderlands of Pandora to battle the Lance and uncover the treasures of the Vault.

The game's four playable characters are differentiated by not just their appearances, but also their available classes and skills, and consist of:

The game has four DLC packs developed in the year following the release of the original game, consisting of:

On April 3, 2019, an Updated Re-release launched on PlayStation 4, Xbox ONE, and Steam, with existing owners of the game on Steam getting the remastered version and the game's DLC for free, even if they didn't own the DLC for the original game. This updated version was eventually released on the Switch as well on May 29, 2020, along with Borderlands 2 and Borderlands: The Pre-Sequel!

Example of:
Voice with an Internet Connection