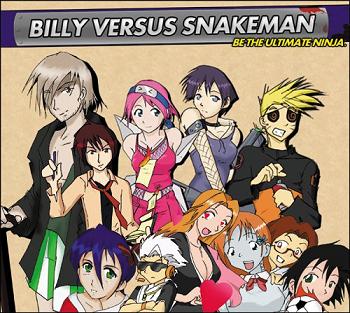 is a browser-based MMORPG by Al McMasters (Eleventy Billionth HoCage in game), in which you play the star of a ninja anime (read: Affectionate Parody of Naruto).

You start as a lowly genin, dreaming of Awesome. However, as you rise up the ninja ranks, you gain new goals that take you to the Other Side with your reaper friends, to the Awesome-blasted Wasteland, to the mastermind manipulations of The Trade, to the secret reaper war of Monochrome Academy, to the wage-slave purgatory of Burger Ninja, to the infinite Fields of the multiverse as a R00t, to the breakneck delivery routes of the Pizza Witch, to Kaiju Island on a Hero's Quest, and to the Aboveground for a Reaper's Game.

The game's mechanics are based on a system of ability checks, which basically work like rolling dice. Your range is the number of sides on the dice (or rather, the largest number on the die), your strength is the die's minimum roll, and your levels are the number of dice you roll. Generally, Strength is better than Levels, which are better than Range, in an approximately 3:2:1 ratio.

There are three primary stats, Genjutsu, Ninjutsu and Taijutsu, and one secondary stat, Doujutsu (the ability to see Ninja Magic) that is only used in certain areas. There are many, many tertiary abilities like Drain (for fighting The Cursed Wave), Piloting, and Flipping Out (Glowslinging).

The game can be found online

Billy vs. SNAKEMAN provides examples of the following tropes: