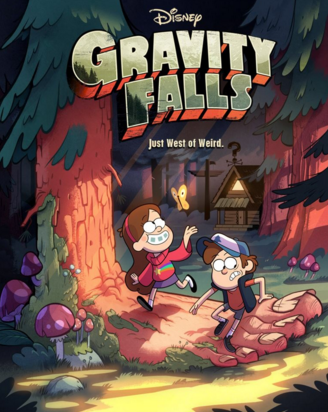 ZHOFRPH WR JUDYLWB IDOOV. note Welcome to Gravity Falls.
"Unfortunately, my suspicions have been confirmed. I'm being watched. I must hide this book before He finds it.
Remember— in Gravity Falls, there is no one you can trust."
Advertisement:

Gravity Falls is an animated Disney Channel Original Series created by Alex Hirsch and produced by Rob Renzetti. It premiered on June 29, 2012.

For one whole summer vacation, twins Dipper and Mabel Pines are sent to visit their great-unclenote or "grunkle" Stan in the valley town of Gravity Falls, Oregon, where he owns the Mystery Shack, a tourist trap operating as "the world's most bizarre museum". Dipper and Mabel's situation worsens (or rather, improves) when Dipper finds a mysterious book, the cover bearing an insignia of a six-fingered hand marked with the number "3". Upon opening it, he discovers that it is a Great Big Book of Everything, explaining the many strange beings, past events, and even federal cover-ups that exist within this town of secrecy — all cut through with an urgent warning: Trust No One!

Thus begins Dipper and Mabel's adventures as they interact with the supernatural world that surrounds them, all while following a Myth Arc where Dipper tries to find the journal's mysterious author.

After the Season 1 finale, the series went on a year-long hiatus. Several mini-series of short films were released over the break to keep fans satisfied. Season 2 premiered on August 1, 2014, a year after Season 1. The series was rebranded as a Disney XD original series, with episodes premiering on that network first before airing later on Disney Channel. In November 2015, Alex Hirsch announced that Season 2 would be the final season

, with the Grand Finale airing February 15, 2016, as a one-hour special. Hirsch has since stated he remains open to the idea of continuing the series with additional episodes or specials, and he delivered with the defictionalized book Gravity Falls: Journal 3 and the comic book anthology Gravity Falls: Lost Legends.

A DVD/Blu-ray of the complete series was released on July 24, 2018 from Shout! Factory, making it the first Disney animated series to receive such a release. You can vote for your favorite episode here

Example of:
Hand in the Hole