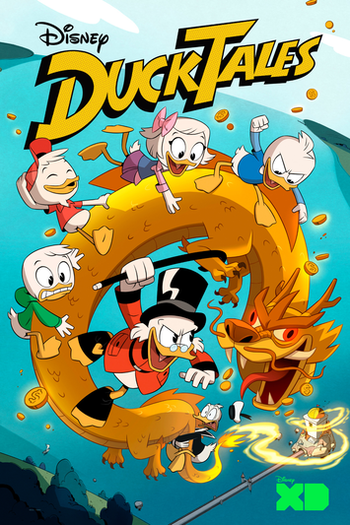 Woo-oo! (Again!)note Clockwise from bottom: Donald, Scrooge, Louie, Huey, Webby, Dewey, and the dragon Pixiu. Not pictured: Launchpad, and Beakley. Definitely not pictured: Della.
"You kids are nothing but trouble... Curse me kilts, have I missed trouble! I suppose I'll have to keep an eye on you to make sure you get into trouble properly..."
— Scrooge McDuck
Advertisement:

DuckTalesnote (also known as DuckTales 2017 or New DuckTales) is a re-imagining of the late 1980s series of the same name. The series is executive produced and created by Matt Youngberg (Transformers: Animated, Ben 10: Omniverse) and Francisco Angones (Wander over Yonder) with the latter also sverving as story editor and co-producer, and Sean Jimenez (Gravity Falls) as art director.

The series shares the same outline of the original series, as we follow famous billionaire Scrooge McDuck (David Tennant) traveling the world; hunting for treasure and having various adventures with his grandnephews Huey (Danny Pudi), Dewey (Ben Schwartz), and Louie (Bobby Moynihan), along with Tagalong Kid Webbigail "Webby" Vanderquack (Kate Micucci), their Voice of Reason housekeeper Mrs. Beakley (Toks Olagundoye), and crash-prone pilot Launchpad McQuack (Beck Bennett). However, this iteration comes with some significant changes that bring it closer to the original comics source material, the most blatant being Donald Duck (Tony Anselmo) now tagging along with his family on their shenanigans. Additionally, the series also serves as a love letter to other programming that aired on The Disney Afternoon, incorporating elements of everything from The Wuzzles to Goof Troop.

At the same time, the series is a Continuity Reboot set in its own parallel continuity. Some of the more obvious changes:

Get ready to have that theme stuck in your head again, only this time, it's more energetic than before!

The series premiered on August 12, 2017 on Disney XD with an hour-long episode, "Woo-oo!" (yes, that is the episode's title, not a Verbal Tic on our part), that can be watched on Disney XD's official YouTube channel here

was announced as being in production and premiered April 4, 2020. The series moved back to Disney XD following such.

that the third season will be the end of the show. The final episodes rolled out in spring 2021, with the three-part Grand Finale having aired on March 15. This made DuckTales the final series from Disney Television Animation that started on Disney XD to end. However, there was a continuation in the form of a seven-part scripted podcast called This Duckburg Life that featured the voice cast reprising their roles, with Huey Duck as the show's host for "Duckburg Public Radio". Here's a preview.

On December 4, 2019, it was announced that the show will be represented