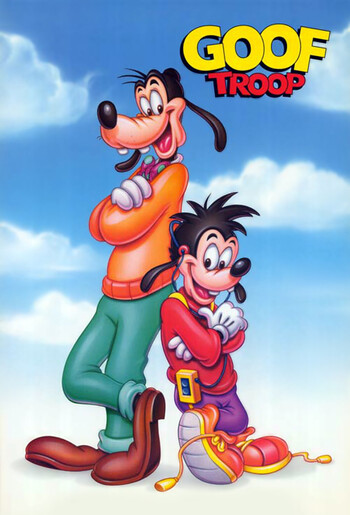 Goof Troop is a cartoon from the early Nineties, inspired by the most well-known series of Classic Disney Shorts featuring Goofy. It premiered as part of The Disney Afternoon syndicated block on September 5, 1992. Seven days later, it began airing as part of ABC's Saturday Morning Cartoon block for thirteen episodes. In this series, Goofy is the father of an 11-year old named Max and lives in the suburbs. Goofy also lives next door to longtime Disney antagonist Pete (who in this version has been turned into less of a villain and more of a total Jerkass), his wife Peg, and his two kids, PJ and Pistol. Even so, Goofy is still just as klutzy and, well, goofy as he was in any of the Disney shorts.
Advertisement:

Slapstick is the flavor of the day, with all four main characters Goofy, Max, Pete, and PJ regularly taking a lot of comedic punishment and shaking it off with Toon Physics and being Made of Iron.

The series is noticeable for steering away from Disney Afternoon’s more timeless fantasy, adventure, and crime-fighting shows, instead of doing a Slice of Life sitcom with subtle Totally Radical undertones.

Although it was canceled in 1993 on both The Disney Afternoon and ABC, with the latter channel replacing the show with Sonic the Hedgehog (SatAM) that fall, this series led to the creation of two movies: A Goofy Movie and An Extremely Goofy Movie. Word of God is that yes, they are in the same canon, despite the absence of Peg and Pistol, and the difference between the TV series and the movies like Goofy's and Pete's houses and their location. There was also a video game for the Super Nintendo. As with its fellow Disney Afternoon shows, it received lots of references in DuckTales (2017), with one episode featuring Goofy in a guest role using an updated version of his design from this show (Max and Roxanne are confirmed to exist, though they only appear in photographs).

The intro to "Goof Troop".

The intro to "Goof Troop".