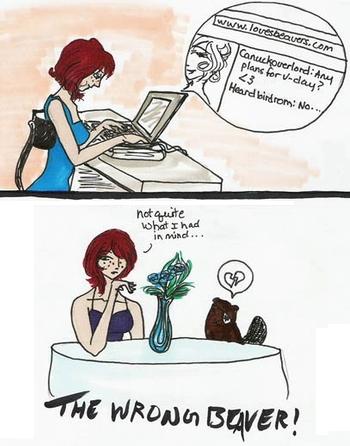 courtesy of Nena Martinez.
Used with permission.
"And while I don't know your real name, your real age, or your shoe size,
I will leave this bedroom chair and this keyboard behind."
— Noah and the Whale, "Second Lover"
Advertisement:

In Real Life, online dating sites and apps are simply another way of meeting people. You create a profile with your picture, beliefs, and hobbies, meet other like-minded users, and chat online until you're both comfortable enough to meet in the flesh. Many a long-term relationship and marriage have begun this way.

...unless you happen to be a character in a Sitcom, in which case the online dating service is yet another tool the writers will employ to turn your life into a swirling miasma of entertaining chaos. In cases of older dating services where photos of the people weren't always readily available, you can expect the first person you're matched up with to be:

Even though current dating services allow users to post pics and advise against chatting with anyone without at least one clear shot of their face, you may still run into other problems:

There are many other permutations and possibilities available, but no matter whom your suitor might turn out to be, the odds are very high that your first date will be anything but typical. If you're using an international dating or marriage agency, then expect an even bigger minefield, sometimes with an aesop about how we should stick to our own kind.

If you meet a love interest over the internet by chance rather than through a dating agency, the results will be similar, especially if the producers want to drop the New Media Are Evil anvil. This trope was particularly prevalent in The '90s when the Internet started making its way into everyday life, but few people online had pictures of themselves because digital cameras were expensive and not yet standard feature on cell phones, and not everyone had access to a scanner for paper photos. Nowadays, someone not having a clear photo of their face is a blatant sign that they're hiding something. But as shown earlier, even a picture can be misleading or Blatant Lies, and doesn't reveal the person's true intentions or personality.

Older Than They Think, with pre-Internet computer dating and video dating services, as well as newspaper "lonely hearts" sections, 1-900 premium rate dating phone lines, and old brick-and-mortar dating services providing examples for this trope. The assumption delivered by these tropes—that normal people can find dates just fine; only weirdos, creeps, lunatics, and other folks with insurmountable character derangements would need to resort to "artificial" ways of meeting people—also fed neatly with the perception that everyone on the Internet is a weirdo creep lunatic to begin with, allowing an even wider range of absurdity. Today, the stigma surrounding online dating isn't quite as strong as before, especially among LGBT people with more limited options than straights. Current stories invoking this trope are less "Beware the anonymous" and more "If it looks and sounds too good to be true, it probably is" or "If you look at everything through rose-colored glasses, those red flags look like ordinary flags." For those who still want a dose of uninformed dating calamity to infuse into their tales, the Blind Date trope is as strong as ever.

For a similar service but with face-to-face interaction, try Speed Dating. For a more general discussion of dating disasters, see Bad Date. Whenever one of these fictional dating services matches a person with someone they already know in Real Life it is invoking the trope It's a Small Net After All. See also Social Media Is Bad. Internet Safety Aesop correlates with this since it's about being careful about who you meet online.