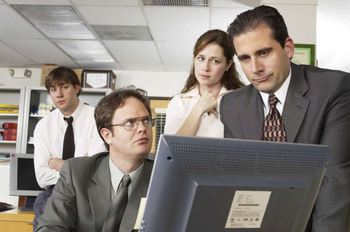 A Sitcom which generally confines itself to a place of employment. Seldom leaves that location. Often features a freakier assortment of characters in its core cast than can be found in the usual Dom Com, because they can come from anywhere; likewise, weird visitors and walk-throughs need not be justified as well as they might be if they had to show up in a living room. Depending on the type of work, when the action is moved elsewhere sometimes brings up the question of Who's Watching the Store?.

See also Set Behind the Scenes, for when the workplace is a movie or television studio.