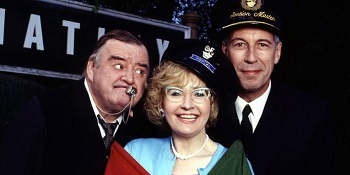 Left to right: Jack, Ethel, Parkin.
"Oh, Doctor Beeching! What have you done? There once were lots of trains to catch, but soon there will be none."
Advertisement:

A Britcom created by David Croft and Richard Spendlove, which ran for two series from 1996-97 and starred some of the same cast members as Croft's earlier series You Rang, M'Lord?, including Paul Shane, Jeffrey Holland, Su Pollard (all of whom had also appeared in Croft's still earlier series Hi-de-Hi!), Perry Benson, and Barbara New.

Unbeknownst to Jack, he has more to worry about than Dr Beeching and his axe - Parkin is an old boyfriend of May's from seventeen years earlier, and not only is he still passionately in love with May after all these years, but she was seeing both men at the same time when Gloria was conceived...

"I'll have to buy a bike 'cause I can't afford a car! Oh, Doctor Beeching, what a naughty man you are!"