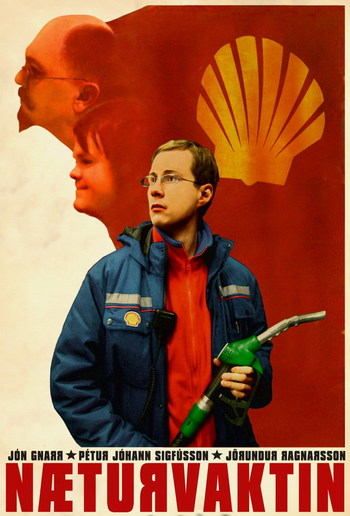 Næturvaktin (English translation: Night Shift) is an Icelandic Work Com. It is set in a filling station, and follows the lives of two pump attendants and their overbearing boss.

The protagonist, Daníel, drops out of medical school after suffering a nervous breakdown, and takes a job as a pump attendant. His dimwitted co-worker, Ólafur, dreams of fame and riches as the manager of his cousin's band, but his irresponsible antics and subservience to his boss prevent him from achieving his goals. Their boss, Georg, is a dictatorial bully who boasts to everyone about his five university degrees and has an obsession with collecting empty soft drink cans to claim the deposit.

So far, there have been two sequels: Dagvaktin (Day Shift), set in a hotel; and Fangavaktin (Jail Shift), set in a prison. There is also a feature-length follow-up movie Bjarnfreðarson which, on its opening weekend, proved more popular in Iceland than Avatar.

The show was broadcast in the United Kingdom on BBC Four in 2011.

A US remake is in the works. It will take place in a Los Angeles suburb, change Ólafur's name to Tommy, turn Daníel into a "hunk playing the field" and Georg into a "survivalist".