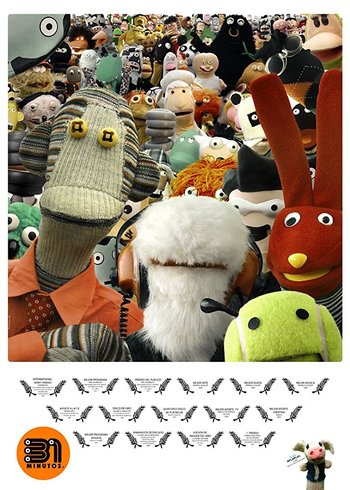 "¡Tulio, ya estamos al aire!"note Tulio, we're on air!
Bodoque:"What a moron, that clown."
Tulio:"Yeah, He doesn't know that puppet shows went out of fashion!"
Bodoque:"Last time I saw one, I fell asleep!"
Tulio:"He's going to lose all his money! Have you ever seen anything lamer than a puppet?"
Bodoque:"Yes, multiple puppets!"
Tulio:"Oh, look at me, putting it on my hand!"
Bodoque:"Look at me, I'm a poor little child with nothing better to do than watch TV shows with ragdolls!"
Advertisement:
Tulio:"I can't afford cable!"
— Tulio Triviño, host of 31 Minutos, to Bodoque. They're both puppets.

31 Minutosnote literally '31 Minutes' is a Chilean TV series created by Álvaro Díaz and Pedro Peirano, parodying Chilean TV news and hosted by puppets. The show began as edutainment running on national Televisionnote non-cable broadcasts roughly equivalent to state networks in the US but with higher production values than local stations, but near-immediately shifted focus to a Work Com caught somwehere between The Muppets and Anchorman with just enough educational material to keep their funding. Episodes usually involve the main host, Tulio Triviño getting himself and the rest of the cast in trouble while on the air, and field reporter Juan Carlos Bodoque acting as a Foil to Tulio, all the while producer Juanín Juan Harry tries to salvage the broadcast.

The show has several recurring segments, such as a music ranking with music critic Policarpo Avendaño playing the show's original music videos, the "Nota Verde"note "Green Report", officially "Green Note" in English hosted by Bodoque, a red rabbit who educates the audience on nature and the environment, and the adventures of ""Calcetín-con-Rombos-Man"note Literally, "Argyle-Sock-Man", a sock with an argyle pattern, a superhero parody centered around An Aesop taken from UNICEF's Convention of Children's Rights. These are intercut by a Framing Device of the crew in the studio getting into some manner of mischief, which took over more of the runtime as the show went on.

Originally aired from 2003 through 2005 on state-owned broadcaster TVNnote the name 31 Minutos is a reference to the station's twice-daily news broadcast, 24 Horas, with a movie released in theaters in 2008. Nickelodeon aired the show internationally until 2007, and Cartoon Network picked up the show in 2015 with the release of the fourth season. Despite its heavy focus on Chilean culture, geography, history and humor, it was a hit across Latin America, and somehow wound up massively popular in Mexico and Brazil, rivalling its country of origin. The show was a cultural phenomenon in Chile due in great part to its witty comedy, catchy songs, and excessively sardonic surreal sarcastic non sequitur and often dark sense of humor. Several episodes had to be censored for broadcast standards across Latin America, particularly those involving Ludicrous Gibs or copious amounts of blood gushing out of puppets. Note that the creators are huge fans of Monty Python.

The show took a seven-year production hiatus due to the massive theatrical failure of the Movie putting the entire production in the red. The brand recovered through live shows and concerts, including several appearances in Lollapalooza Chile and the Viña del Mar Music Festival. A fourth season was announced to be in the works in 2012 and aired October 2014. Since then, the show survives on YouTube

, with all four seasons in their uncensored Broadcast forms, every single music video made for and after the show, Live Shows, among other things. Though there are no plans for a fifth season, the original staff regularly make new educational shorts funded by UNICEF and the Chilean government ranging from single PSAs to short miniseries, aimed at explaining major events such as the national Census or the COVID-19 pandemic to children.

A character sheet is in construction Here

Note: since this series includes a lot of significant Spanish names, please try to give them a translation to English. You can always use notes or labelnotes: name[[note]]Translated name[[/note]] or name[[labelnote:Translation]]Translated name[[/labelnote]]

Bodoque encounters a spider in the shower and is deeply afraid of it.

Example of:
Spiders Are Scary

Bodoque encounters a spider in the shower and is deeply afraid of it.