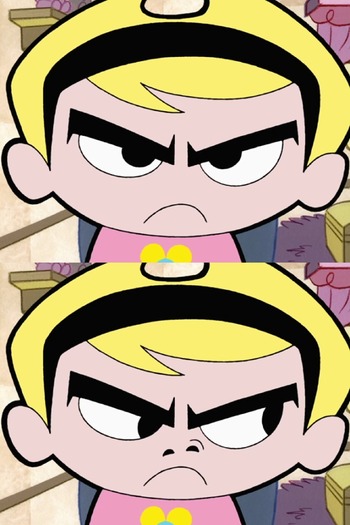 Even The Noseless will grow nostrils if the stench is bad enough.
"On the one hand, Noah is right. On the other hand, Duncan is right. (suddenly has a third hand) On the third hand... hey! Whose hand is that?"
—Owen, Total Dramarama
Advertisement:

In a lot of comics and animation, the anatomy of living creatures tends to be simplified in a variety of ways. Some of these are common, such as people not having any discernible lips. Others are more unique to their artists, like how The Powerpuff Girls are drawn without any fingers.

However sometimes the piece of anatomy that's usually missing becomes important to the story, and so a character will suddenly gain that piece of anatomy for exactly as long as they need it. For example, if characters in a series don't usually have lips, they'll suddenly sprout a pair if they need to kiss someone. Or, if they're normally drawn without eyebrows, but they're doing a Spock imitation, they'll suddenly grow some just for the Fascinating Eyebrow moment. Characters without eyelashes may sprout a pair to flutter. Characters with Black Bead Eyes may suddenly grow sclerae and irises whenever shocked or angry. One of the most common is characters with Four-Fingered Hands suddenly gaining a fifth finger, especially in closeups.

Depending on how entrenched the art style is in the audience's mind, this can seem rather jarring. And sometimes that's actually the desired effect.

Contrast Invisible Anatomy, when body parts functions even without being shown.

For the trope applied to accessories that suddenly appear on a character for a certain scene, see Instant Wristwatch.

On "Pete the Cat," Pete is normally depicted with no visible mouth, but gains one when singing or speaking, which is typically at the end of a story to deliver An Aesop, as seen here.

On "Pete the Cat," Pete is normally depicted with no visible mouth, but gains one when singing or speaking, which is typically at the end of a story to deliver An Aesop, as seen here.