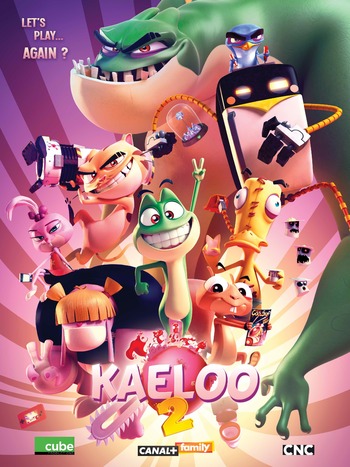 With Friends Like These...note Pictured: Kaeloo the frog, Bad Kaeloo the toad, Stumpy the squirrel, Quack Quack the duck, Mr. Cat the cat, Pretty the rabbit, Eugly the fat rabbit, and Olaf the emperor penguin
Advertisement:

Kaeloo is a French CGI cartoon written by Rémi Chapotot and Jean-François Henry and produced by Cube Creative. The series, which is a Deconstructive Parody of children's shows, follows the adventures of a group of Funny Animals living in a Crapsaccharine World inhabited exclusively by kids called Smileyland as they play various games, like figuring out who graffitied a picture of a penis onto the bathroom door, making a Deal with the Devil to become a witch doctor and get voodoo powers to turn your friends into your slaves, and baseball. While the premise may sound childish, the games usually end up being taken so seriously by the group of "friends" that injuries, huge explosions, and all sorts of weird, crazy, and not very kid-friendly stuff end up happening quite often.

The show began as a 3-minute short film in 2007, which caught the attention of producer Cube Creative, resulting in an entire season being broadcasted on Canal+ in 2010, followed by a second season in 2012, a third season in 2017, and a fourth season in 2020. The show's official English dub was aired briefly in Australia in 2012 on ABC but was then cancelled; it continued airing on NITV in April 2018.

You can check out the show's character page here. It also has pages for trivia, Shout Outs, and episode recaps.