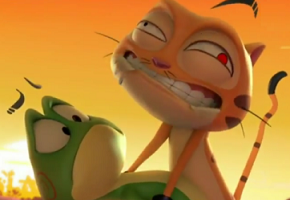 It's not just his tail that's stiffFor context... This picture is exactly what it looks like. Kaeloo tried to convince Mr. Cat to have sex with her and he agreed..

There's a reason this show's G rating didn't keep. After all, it has been noted for its ability to keep both kids and adults entertained.

Mr. Cat: What is this, a Russian mail-order bride?!

Let's Play Once Upon a Time