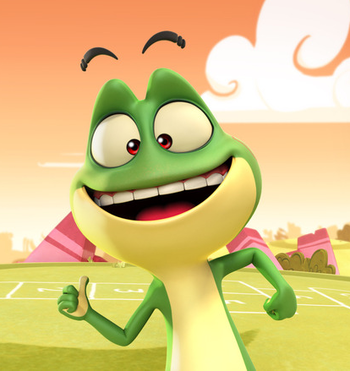 "Hey there, buddies!"
Voiced by:

The series' protagonist, if you hadn’t guessed from the name. She's a kind-hearted, fun-loving frog and an all-around Nice Girl. She always tries to make everyone happy and is often the one to suggest they play games. While usually a gentle and loving person, she transforms into a huge buffed toad named Bad Kaeloo whenever someone manages to push her buttons. 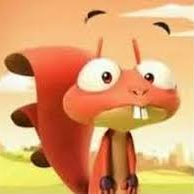 An extremely unlucky squirrel who sucks at everything. He is completely nuts, and often gets erratic spasms out of nowhere (implied to be because of a disorder like Tourette's). He's immature, not very bright, and generally comes up with the craziest ideas or reasonings. He sees Kaeloo as an older sister, Quack Quack as his best friend and Mr. Cat as his role model. He is extremely addicted to video games and comic books, especially the "Mr. Coolskin" franchise. A Running Gag in the series is to mention his (apparently non-existent) sisternote  His official bio says he has 36 sisters. He has been an antagonist in several episodes for no apparent reason, sometimes teaming up with Mr. Cat, and gotten away with it. 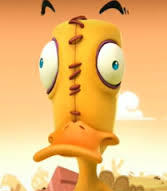 Super-talented duck covered in stitches and obsessed with yogurt. The only word he ever says is "quack", though everyone seems to understand what he means by that... or sometimes they don't. The stitches all over his body are explained by the fact that he is actually indestructible, and thus able to survive any injury. He is Stumpy's best friend, Eugly's boyfriend and Mr. Cat's favorite punching bag. 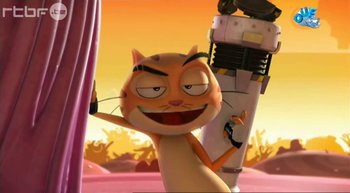 The series' Villain Protagonist, an Ax-Crazy, perverted, selfish, egoistic, alcoholic, hypocritical sadomasochist who has displayed quite a few signs of Troubling Unchildlike Behavior. His favorite hobby is to harm and injure Quack Quack in every way possible, and he owns an arsenal of weapons which he uses for the purpose. He's also the only actual smart character on the show, the other "smart" characters being Ditzy Geniuses and the remaining characters being downright moronic. Despite all of the aforementioned characteristics, he is Kaeloo's closest, most loyal friend and confidante with whom she has Unresolved Sexual Tension. He can be nice to the rest of the characters at times, especially Kaeloo, and as the series goes on he becomes much nicer. Mr. Cat had a really difficult past, and he in fact met the others after running away from home to escape his abusive family.

The main cast's neighbor. She is an Alpha Bitch who considers herself to be the pinnacle of beauty. She is madly in love with Mr. Catnote It's implied she only likes him for his looks (not that the feeling is even close to being reciprocated), but she utterly despises the rest of the cast except Eugly, who she does have a few Pet the Dog moments with. Pretty will do anything to look good and stay young and slim. 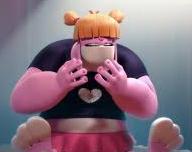 The fraternal twin sister of Pretty, Eugly is a fat, ugly rabbit with a kind heart. She’s capable of beating anybody up, but she rarely does so of her own accord, usually under Pretty’s orders. 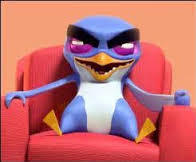 A penguin with a Russian accent who wants to Take Over the World and cover it with snow and ice. He is married to an ice cube named Olga.

Ursula
Stumpy's long-distance girlfriend who he met online, and one of the few people to actually treat him well. She is mostly just mentioned in passing, or if she is physically present in the episode, she is offscreen.
Kaeloo's Family
Kaeloo's relatives, who are all toads.
Stumpy's Mother
Stumpy's mom.
The Cat Family
Mr. Cat's parents, Al and Lola Felicia, and his two older brothers. Mr. Cat met the main four after running away from them.