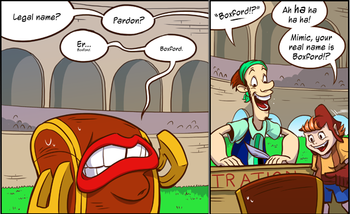 Some people just don't like their names. That's fairly reasonable — you don't exactly get a choice in that matter — but some find a way around that by going by a different name, usually their middle name or by rearranging their names.

This can also be an attempt to avert I Know Your True Name. Mundane or magical, the character in question is not comfortable with someone else holding that power over them, and there won't tell anyone, unless there's a certain amount of trust between them.

In fiction, this can often be used to disguise the true identity of a character, and when their full name is revealed it is generally considered a major plot or character point. Also often used as a Shout-Out, a Historical In-Joke, to reveal that Everyone Is Related once again, a character's use of a Full-Name Ultimatum, or to make a point by revealing a Meaningful Name.

Turns out her name isn't Tiny Nose after all.

Turns out her name isn't Tiny Nose after all.