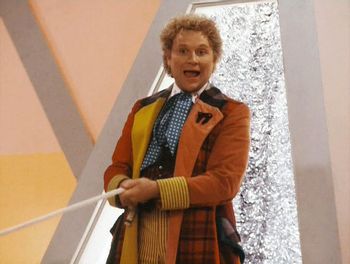 The Doctor prepares to descend the tinsel tunnel and it's somehow his coat that we notice first.
"The stories I've heard about you. The great Doctor, all knowing and all powerful. You're about as powerful as a burnt out android."
— Maylin Tekker
Advertisement:

The one with the cardboard Jon Pertwee cutout.note And unlike what Anthony Ainley got, this time it's actually supposed to be a cutout.

The Doctor and Peri happen upon yet another Crapsack World, under the heel of a mysterious dictator known as the Borad who is trying to provoke interstellar war with some inoffensive handpuppets for apparently no reason. Mirror-fearing robots keep everyone in line, and the preferred method of execution is to be shoved into a one-way portal through time and space. It is called... the Timelash. As the quisling council leader and Large Ham puts it: "Most people depart with a scream."

It seems someone has — whoops! — accidentally fallen into the Timelash (and holding a MacGuffin, what's more), and the baddies want the Doctor to go and get her back. And to make sure he helps, they very originally kidnap Peri. At least, they say they do, but she in the meantime has made contact with a group of rebels in Morlock-infested tunnels, where she does a passable job winning them over with her encyclopaedic knowledge of previous Doctor Who companions (because, as it turns out, the Doctor has apparently visited this world before, in an unseen adventure back when he had an impressive bouffant and was travelling with Jo Grant). And then a flaming android appears out of nowhere.

The other end of the Timelash turns out to be 12th century Scotland, but, due to a collision with the TARDIS, the girl and her MacGuffin have ended up in 1885 instead. The Doctor convinces her to come back, but gets saddled with an overly enthusiastic stowaway in the bargain, named Herbert.

Back on the Crapsack World, the baddies have rounded up the rebels and have started throwing everyone they can into the Timelash, including, of course, the Doctor, once they've got their MacGuffin back. Oh, and Peri is chained up in the caves being menaced by a Morlock (a giant snake monster thing), for reasons that will become clear later. The Doctor and others manage to stage a moderately successful coup, even sending a flaming android back in time for good measure. While the new leader of the planet begs the invading sock puppets not to nuke them all, the Doctor wanders off, Herbert in tow, to deal with the Borad.

The Borad turns out to be a weird mutant experimental mixture of two races (who bear more than a passing resemblance to the Morlocks and Eloi of Wells' The Time Machine), and now he wants to kill everyone so that he can re-populate the world with more of his own cross-eyed hybrid kind. And he also has picked Peri for his queen. The Doctor defeats him handily with a Power Crystal he picked up from inside the Timelash, frees Peri, and returns just in time to discover that the Aliens have already fired their missile.

There is nothing for it but to fall back on the old Heroic Sacrifice and interpose the TARDIS between the planet and the missile. Which he does, after forcibly evicting Peri (and being horrified to discover that Herbert has once again stowed away). TARDIS goes boom, and the planet is saved! What's more, the Aliens are suddenly anxious to make peace, realizing that there might be some negative repercussion to just having killed the Lord President of the High Council of the Time Lords.

But what's this? It turns out the Borad is Not Quite Dead (there were clones or something) and still has designs on Peri. Which he proves by threatening to kill her. Fortunately, the Doctor and Herbert are also Not Quite Dead for no adequately explained reason, and the Doctor throws the Borad into the Timelash so that he can spend the rest of his days swimming around Loch Ness.