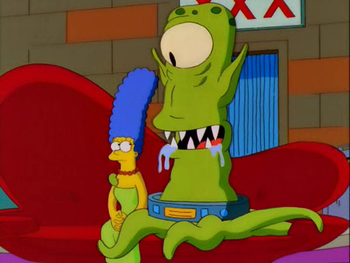 "You look lovely this evening. Have you decreased in mass?"
"An especially enjoyable biological howler was the notion, common on pulp magazine covers, that aliens would lust after human women, especially if partially unclad, this being on par with men lusting after squids."
— The Encyclopedia of Science Fiction (1995 edition) entry on Scientific Errors
Advertisement:

Apparently, the hottest thing in the Multiverse, above even the Cute Monster Girl and Green-Skinned Space Babe, is the Human Female. This is one of the reasons humans think Aliens Are Bastards.

Sooner or later, no matter what the species looks like, you'll find a sample of the male that prefers human girls. It can be an alien, a swamp monster, a robot, a Non-Human Sidekick, or even a giant gorilla. (Sometimes it Was Once a Man, which makes the attraction less implausible.) Note that this is usually played straight, while the inverse is almost always played for laughs. Also, the male non-human is far more likely to actually get the human girl.

Biologically, this is completely insane. Imagine a human in the real world falling in love with a squidnote Inklings don't count, as that's morally wrong for a different reason. and you'll see why. Of course, squids don't have that kind of complexity, which may be the difference here — you can't see past their looks to their "nice personality". But Most Writers Are Male. It's more plausible with Rubber-Forehead Aliens and other Humanoid Aliens, however, since they look enough like humans and vice versa for there to be an attraction. Regardless, this often results in Half-Human Hybrids. This, however, is equally biologically insane; you'd have a better chance getting knocked up by a tree, since you and the tree are at least from the same planet. Then again having Human Aliens and Rubber Forehead Aliens is just as big a case of Artistic License – Biology to begin with, so interbreeding with humans wouldn't be too big a leap from there.

Named after the infamous 1967 B-Movie. That this trope was popularized in 1950s and '60s monster movies is no coincidence. Considering the racial context of the time, this trope is a close cousin to the antiquated belief that Scary Black Men are always trying to steal white women. Which is itself a variation on the ancient tribal warfare trope of "They're invading, and they want our women/men!" While that version is a Discredited Trope, the more general "non-humanoid character attracted to a girl" is not.

Very rarely, the species either culturally values the idea of human slave concubines, or is so sterile or depopulated that this is the only means they have of avoiding extinction.

On the rare occasions that Venus Needs Men, the Venusians will almost always be sexy, scantily clad, and conforming to local norms of beauty (unless the joke is that they're abhorrent admirers to human men). But it's not always desirable, as there are lots of examples in fiction where female aliens just Conceive and Kill, instead of kidnapping.

Compare Boldly Coming, Face Full of Alien Wing-Wong, Interspecies Romance, and Monster Misogyny. Contrast with Humans Are Ugly. See also Beast and Beauty and Touch of the Monster (for how this is typically shown in a movie poster).