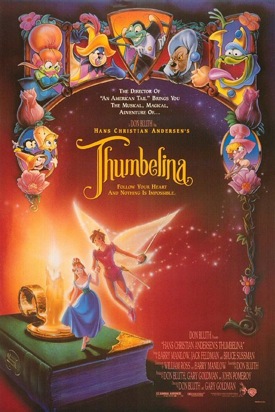 It sticks to the basic story of the original fairly closely. A woman pines for a child and, magically, she is gifted with a daughter no bigger than her thumb. Thumbelina, as she is aptly named, is a happy person but wishes she could find someone else her size. Her wish comes true when she meets the prince of the fairies, Cornelius, and they quickly fall in love. But that night, she's snatched away by a toad who wants Thumbelina to join her performance troupe and marry her son.

She escapes with the help of a friendly swallow named Jaquimo, but now she has the impossible task of getting home. Meanwhile, both Cornelius and the jaded toad Grundel are determined to find her.

Compare with Santa and the Ice Cream Bunny, which had its own... unique take on Thumbelina.